Skip to content
Home > Those buggie bugs that bug you
Published June 3rd, 2014 by Tina DeSoto

Those buggie bugs that bug you 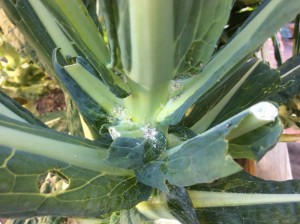 There is nothing worse than putting time and money into a garden project, just to have an army of aphids appear and destroy your precious green babies. Last year, for me, it was earwigs.  Some might argue that earwigs aren’t a garden pest. Well, there were an abundance of earwigs in my yard last year and they destroyed every home-sprouted seedling I planted. I wound up BUYING replacement plants from Home Depot. So much for doing it the frugal way!

After I got through the earwig onslaught, along came the aphids. Aaaaargh! This year I found a colony on the stalks of  a dill plant. I don’t care so much for dill, so I pulled it out, hoping they wouldn’t find their way to the Tuscan kale. Alas, it was too late, as you can see from the pic above. I’ll pull the kale out too, which is really ok because it’s probably getting too hot for it to grow well, anyway.

I am not the only one being bugged by bugs! Today, my friend Melissa F. asked me, on Facebook, if I had any hints about keeping the bugs from ravishing her veggies (I hope the bugs at least gave the veggies a phone-call afterwards.)

Anyway, Melissa, I know what you mean and YES I do.

Tough on grease. And bugs.

Here is how I (mostly) handle the various bugs: prevention. Healthy soil = healthy plants. And healthy plants are much less likely to harbor bug colonies, like aphids.

*Make sure you start with good soil. Where we live (Inland Empire, Southern California) the dirt is red clay and much too hard for most plants to thrive in. It doesn’t drain, either. I amend it by mixing up 1/3 each: compost/mulch combo (bagged from the garden center,) sand, and dirt. If I have some Perlite on hand, I put that in too. (I can expound on the virtues of Perlite another time.)

*Continuously add more organic material to your new soil throughout the season.  Save some coffee grounds and eggshells, let them dry out, and pulverize them in a blender or food processor. Sprinkle this around your plants and gently dig it into the soil.

*Mix a tablespoon of plain Epsom salts into a gallon of water, and water your pepper and tomato plants with it once a month. Put some in a clean spray bottle and spray the plants with it, too. 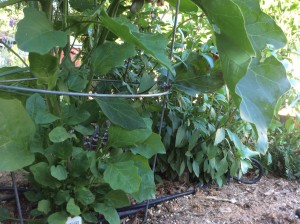 Eggplant on the left, Thai basil to its right

*Plant other flowers and herbs in with your veggies. I use marigolds, basil, garlic, cilantro.  Let the herbs “bolt,” or flower, so that good insects are attracted to your garden area. Do not kill the spiders and the lizards!

*Water at the same time, the same amount, every day. (That won’t be difficult, right?) Also,  don’t use sprinklers that broadcast spray, especially if your plants are spread on the ground. Wet, soggy leaves attract pests.

Can you see the Cabbage Worm?

*Once you find some bugs on your plants, use the soap spray. When you find the green “caterpillars” (Cabbage worms) on the brassicas (these are your broccoli, brussels sprouts, cauliflower, kale, etc. plants) – usually on the undersides of leaves, simply pull them off  the plant and feed them to your dog.

*Be on super high-alert around your tomato plants. When you see black coffee ground-like crumbs on the leaves, go Tomato Hornworm hunting. They are green caterpillars that look like Cabbage worms on steroids. These guys can get so big, even your dog may be afraid. Drop them in a bowl of beer, or squish them. Be a good neighbor and DO NOT throw them over the fence!

*Attract blue jays to your tomato plants, because blue jays LOVE tomato hornworms: put some raw peanuts in a bowl that is set on a stake plant-high. Make sure there is water nearby, too. Skip the blue jay attraction if your dog is a good hunter, though

When I experienced the earwig convention in my garden last year, I handled them with beer: I buried a small bowl so the edge was surface-deep. I poured in some beer and checked back the next day – like most conventioneers, they just wanted to party at night. The bowl was “swimming” with dead earwigs!

However, my aphid problem got worse, the ladybugs I bought did NOT stay in my garden (ladybugs love to eat aphids and you can order them from Home Depot online. Some garden stores also carry them in stock.)  I had to bring out the big guns – the Ortho. Seriously, I hated to do it because I didn’t want to kill the good bugs, or the lizards’ food supply. It only took a couple of applications, though, and things became controllable. 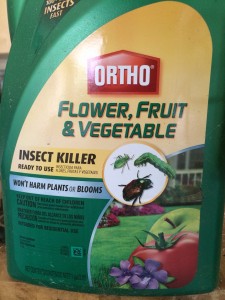 This year, I keep an emergency spray bottle of the Ivory dishsoap water with an ounce of the Ortho mixed in.

Look at the “big picture,” though: We’ve been buying our produce from grocery stores for so long now, we believe that the fruits and vegetables have to look perfect in order for them to be good. Accept a few holes here and there where the worm ate your chard. It’s okay! And, if all else fails, pull the plant out. You’ll be ticked off right now, but another growing season is around the corner and you can try something else.