Hot, But Not (Usually) Spicy

Yeah, life got a little hectic. And I got sidetracked. I’m back now and I want to share something with you. It probably won’t change your life, but it’s still something good to know about. 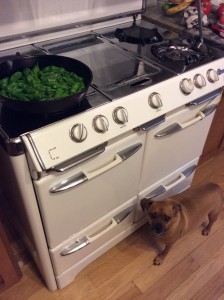 So good, even Biggie is a fan!

Have you ever heard of Shishito peppers? Yeah, until two years ago, when Joe and I had cocktails at the Stark Bar, (at the LA County Museum of Art) I hadn’t either. Sauteed Shishito peppers are everything I wish a whole cooked chile would taste and smell like: slightly crispy, no bitterness, no burn, and that awesome grilled-chile scent.

Okay, honestly? Every once in a while there will be a spicy one. Not spicy enough to kill you; just enough to let you know you’re alive.

The best thing about these peppers is, you can eat a lot of them with no guilt.

Some people can snack on whole Jalapeño peppers, and maybe they are calling me a big wuss for wanting to eat a chile with no spice. Don’t misunderstand me: I love spicy chiles! I would NOT like to eat a bowl full of them, though. These Shishito peppers, which hail from Japan, are devoid of spice – except for that rare rogue one – KAPOW!! They are an awesome green “vegetable” (technically fruit) that you really CAN eat a bowl of, without the inconvenient side effects of Jalapeños. After I first tasted Shishitos, I wondered: how was I going to get more? How could I eat these whenever I wanted? I should be able to grow them myself, right?

The problem was, no one here in the Inland Empire knew what Shishito peppers were. Not at the farmers’ markets, not at the garden centers. I found a supplier of seeds online, but I could not get them to sprout. About a year later, we visited a Japanese market in Covina that a friend recommended. I was so excited to find live Shishito pepper plants, I bought two.  Last summer was the best! These plants are crazy productive. We pretty much ate peppers whenever we wanted.

And then a funny thing happened: Shishitos started popping up around town. Our local Eureka! Burger added them to their appetizer menu. This spring, the Home Depot had plants for sale (one of which I purchased and planted, and it is currently producing lots of peppers for us). The best news is, they are now selling fresh Shishito peppers at Trader Joe’s, for about two dollars a bag. 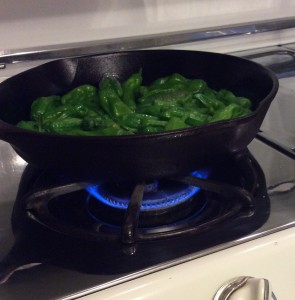 They are very easy to cook up. You need a hot pan and a little bit of oil. Let the peppers kind of sear and blister before you stir them around. Watch out! Similar to camels, they spit! Cook them for 8 to 10 minutes, then put them in a bowl and toss them with salt. That is it! Eat them with your fingers, like a pirate would if he had a chance to try Shishitos. Truth is, they would have been a great food for pirates to eat: they are high in Vitamin C, as well as Vitamins K and B6! Arghhh!

Perhaps these delicious peppers aren’t going to change your life. But, then again, especially if you’re at risk of developing rickets, maybe they will.